The variety of apples Gala is famous for its fruits since 1957. Large, beautiful fruit of a presentation have excellent taste qualities and are a commercial variety in many countries of the world.
Apple Gala was bred in New Zealand half a century ago by breeder D. Kidd. The basis was taken such varieties as Kids Orange and Golden Delicious. The rapid spread of Gal to neighboring countries was due to the highest quality of fruits, and the variety took the 2nd place in the world in the cultivation of industrial apples.
The trees of the Gala apple tree are short, medium-sized with a wide oval crown. Fruit can be both annual shoots and old branches. Blossoming apple Gala begins quite late - in late spring. Refers to partially self-pollinated. To achieve maximum fruiting, it is better to plant next to several other apple trees, such as Elstar and James Grieve.
It is considered that the appearance of the Golden variety was absolutely random. But soon enough, scientists estimated its excellent characteristics: early yield and very high yields - up to 79 kg from one tree. This inspired many gardeners first of the US, and then of Europe to create whole plantations under the Golden Apples where they are grown on an industrial scale. In some countries, this variety is still one of the main ones. 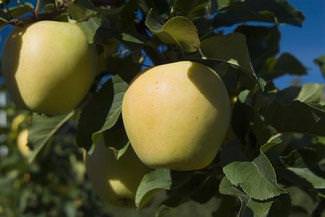 The weight of Golden apple can vary in the range of 12-220 grams.
Golden Golden apples have long been liked by many for their extraordinary sweet taste. Thanks to him, the fruits of this variety are perfect for cooking recipes for a variety of pastries and fresh consumption.
In addition, they have a low calorie content, per 100 grams of product - 48 kilocalories and therefore may well be part of a dietary diet.
Golden apples have a round, somewhat conical shape, in most - medium size. The skin is dry, slightly rough to the touch, with small black dots. Its color changes during the ripening of the fetus: in immature it has a bright green color, for ready-to-eat it is golden.
The pulp is juicy, very fragrant, moderately dense. Her color also varies from light green to cream, depending on the maturity of the fruit. Apple Golden is advantageously different in that it is perfectly stored, and during transportation it does not crumple or spoil. 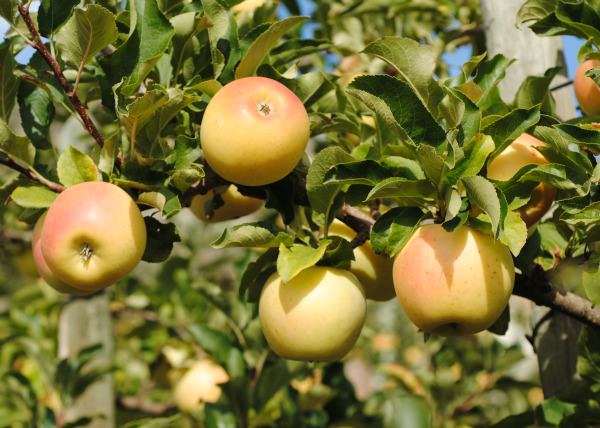